It seems VINCENT choppers are becoming common after all or at least less rarer. Yesterday I had featured Mike Marquart's VINCENT Chopper designed by Redneck Engineering. Another Vincent going the chopper way is featured today and probably this bike just maybe more known that Mike's because of a certain TV programme. If you see a chopper with ultra clean lines and without any wire and cables, you can be assured that it has come out of Matt Hotch's garage. And if the owner said he paid a lot of money for the beauty, rest assured, it has to be a Matt Hotch design. Well, champion builder Matt Hotch became famous (not especially, but also) for building radical styled clean choppers. The choppers are hand built only by him (in a way, you wont find any other fingerprints), life waranteed and damn costly. 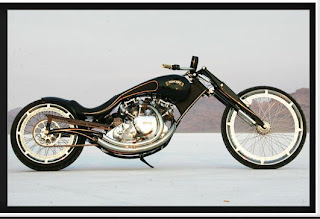 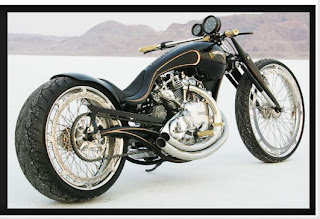 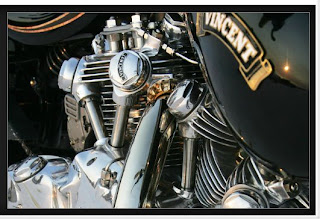 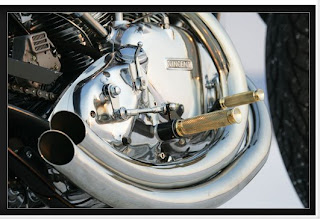 I am not sure of this Vincent's pricing, probably it has not been decided as yet since his website features this bike in 'Current Projects'. It is rumored to be around $85000. What I got to now though is that this is a 1951 Black Shadow. Not much info on the bike though on his website or anywhere. But of course, its a stunner! yes, it does look similar to Mike's bike, but thats obvious since both caryy the 'chopper' look. Engine, as mentioned in the previous post was done by Steve Hamel. Matt has maintained his 'invisible wirs and cables' look in this chopper as well, the body is a pure form of art, cuvaceous and on a exercise diet. The rear wheel is a size 180+ (probably 200) and definitely like those twin enhausts, so curvaceous again matching the body style to a T. Nice straight handlebars, eh! wonder if you can keep them riding for long though... Not very confident if Matt has kept the rear absorbers, seems he has done away with those.The single headlamp seen on some pics, I believe, is temporary till he finds a better alternative. And nots talk about detailing here. We are too insignifant to even pass good comments on the works on someone who is considered one of the world's best! 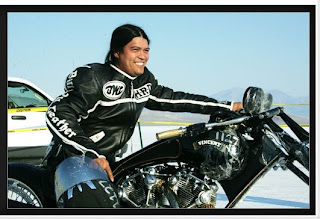 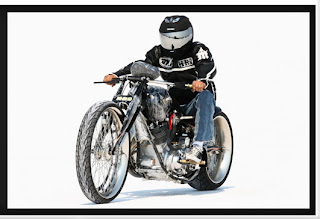 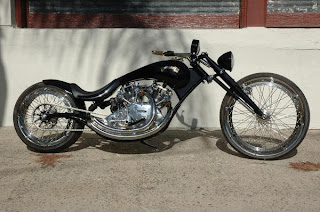 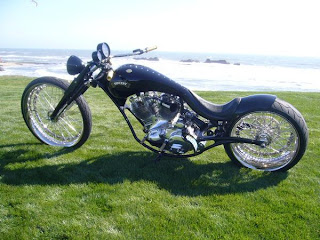 I am sure you would also remember the 'Biker Build Off' series in Discovery Channel featuring Matt Hotch vs. Roger Goldammer. Heavily promoted as a battle between two heavyweights, Matt was the then 2 times reigning “Biker Build-Off” champion squaring off with 2 times former world champion Goldammer. Matt first exhibited his Vincent chopper then which was going to take on Goldammer's very unconventional 2 stroke Yamaha RD250 on the Bonneville Salt Flats for the gold. It was Biker Build Off Season 3 - Episode 13 to be precise which was the finale of season five pitting these two heavyweights. Matt has built his hi tech version of a post war Vincent Black Shadow against Roger's "purpose built" racing machine with elements of dirt bike and race bike powered by a go kart engine. Hotch and Goldammer met in Canada to ride 900 miles together to the salt flats of Bonneville, Utah. For the record, Goldammer won. You can see more of their bikes at Biker net. 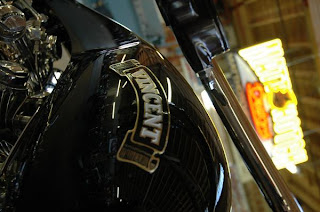 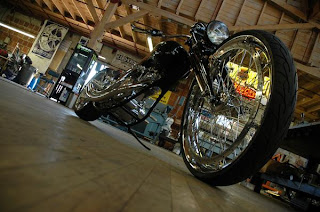 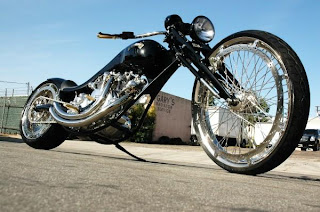 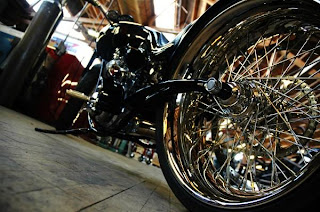 In 2004, Hotch won his first Discovery Channel’s Biker Build-Off Championship with his 'Chingon' and again in 2005 for the second time in a row (and thereby being the only champion of recording back to back wins) with the retro design 'VLux'. Both the Chingon and VLux are featured in his website but is currently being updated. So why a Vincent as a Chopper? “My grandfather had one when he was a hooligan and hillclimbing.” Quite simple. Matt has been customizing choppers since 16. His philosophy - “perfection is possible”
Visit the Biker Net website to know a little bit more on the par excellence designer.
You can view a lot of pics and videos of Matt's other bikes as well in his My Space profile
Pictures courtesy - Matt Hotch Website & Matt's My Space