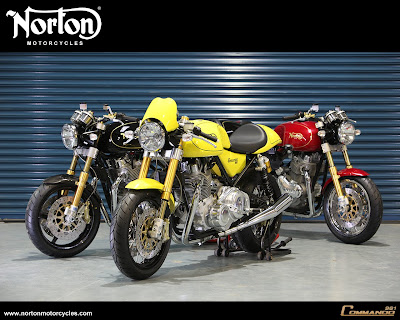 Nothing like a classic, eh! A NORTON, original, factory built, just like they used to make it, but completely new from the factory. Now, wait, look at that price, it is priced at 15 995 £/ 25, 999 $, it is almost equal to the MV Agustas and sure crossing most of the Ducatis, how can they price it so high for a air cooled machine which is actually a 80s bike in totality? And not that it is going to outrun any bike in its category or even be able to provide the comfort and handling of the new age Jap or Italain bikes…
Okay, if you are thinking along those lines, you sure shouldn’t read any further and maybe you can look at some other posts. But now think! Imagine a movie, a Bruce Lee movie or a Charlie Chaplin movie which has been hiding under some dark places and now discovered again and has been digitalized to give a new look. It is not a new movie, it is an old movie but you know, it has got the digital treatment, say bright colours, better sound and all. And now think of the new computer generated blockbuster movies like 2012 or Matrix or the likes. Which movie would you prefer if the ticket costs are also equal? If you would go for the Charlie Chaplin or Bruce Lee movie, than you know why Norton can afford to make a 80s bike now. This is a Norton, period. You know MV and Ducati will keep on churning out brilliant bikes in the future just as Hollywood would keep on giving blockbuster hits, but what are the chances of you getting a hold of a rare Charlie Chaplin or Bruce Lee movie? 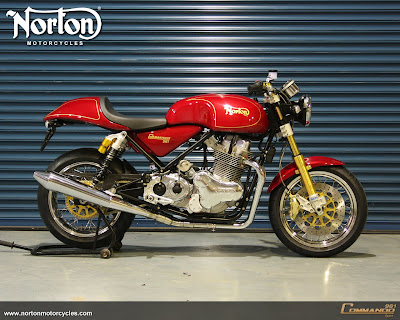 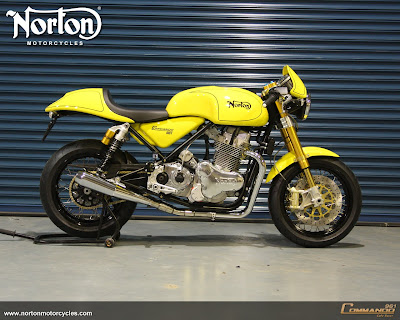 So, this is a Norton, period. Money has probably got nothing to do with it. What one should realize is that you can get to buy a brand new Norton, you can now buy a new Norton, you can ride a new Norton that is factory built. I know I am repeating, but do you realize that you can actually ride a new factory built Norton, yes, a never before seen Bruce Lee film has just opened in a cinema near you!
And you know what? This Norton is just too damn good, we will get to the too damn good part, what I mean is when you talk about something like Nortons, you don’t talk about money. Okay, if you are still reading the post, I believe you are a sucker for British bikes like me and so now we are on the same page.
Norton is by far the most historic and famous brand coming from the land of the Queen with due respect to modern brands like Triumph and legends like Vincent and BSA. Although it never would have mattered which motorcycle Norton relaunches, but we are oh-so-thankful that it is the greatest bike from the Norton stables, the COMMANDO. 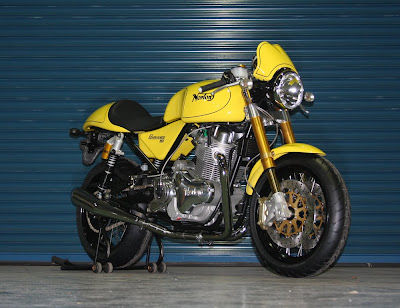 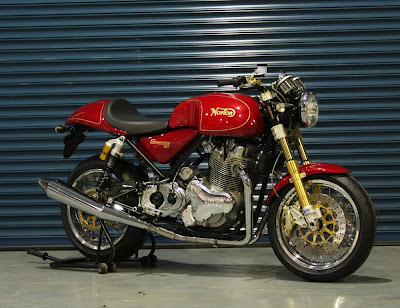 This is the new Commando, the 961 SE and Norton although has long announced of its intention to unleash the beauty a long time ago, it was only a couple of weeks back that they finally ended our anticipation and for waiting us so long, they have given us something extra. The Norton Commando 961SE will come out or has come out has in three new models, the Standard version, the Sport version and the Café Racer version. Really cannot say which looks better, actually I guess you never compare a Norton with another Norton. Look at the headlamp, look at the side panels, look at that b-e-a-u-tiful belly and look at that sexy rear and… and look at the simple elegant exhaust and will you take a look at the overall all-metal-no-plastic beauty, this is as close as you can get to memories, thank you Norton. Just for your information, even if you plan to buy the S.E, you can’t, it is already sold out! But there is another good news, the Café Racer is cheaper at 13, 495 £ or 21, 935 $ while the Sport version is even cheaper at 11 995 £ or 19 500 $.
Watch the videos slowly and repeatedly. You will keep on falling in love all over again. I have… I have. Have you heard its voice? Oh… the legendary exhaust is back. If you think I am overdoing it a bit, then I am probably because I have not seen many legends being resurrected. Quite often, there have been talks, but nothing finally happens. And now that finally something has finally happened, it is time to rejoice. The first video is a Norton home video and its DVD is available free here and the second video posted here is covered by MCN, a British magazine which maybe partial to the Norton being a British bike. Good, because it is much better than a critic who would probably laugh off at the beauty comparing its price to what it is offering. 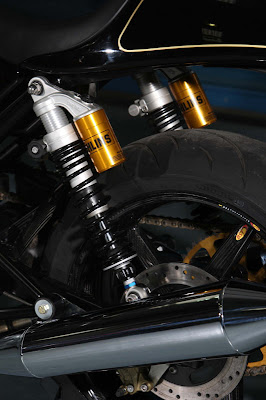 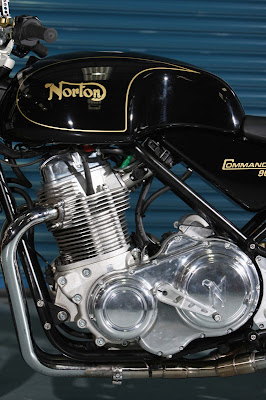 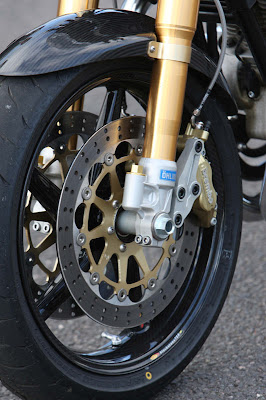 All three models will of course have the same base. The air cooled 961 cc twin develops a healthy 80 bhp @ 6500rpm and a very respectable torque figure of 90 Nm @ 5300rpm. Not by any standards are they chart topping and they are not even intended to be. According to the reports, the Commando has more than enough low end grunt at even 2000rpm to zip and zoom in city traffic. The engine features an absolutely linear power delivery, which means it'll take any gear you throw at it. With 80bhp on tap from a 961cc engine, you can easily cruise the city at over a ton mark if you can get that much of a space inside the city to wriggle your right hand at the throttle. From the city limits to the scenery beauties and beyond, you can happily keep on cruising at the ton mark and that is the whole story of the bike. This is a practical bike which will satisfy you every way you want and its power is what makes it practical – useable. All 3 bikes as mentioned carry the same traits. It has a steel tubular frame with a twin-sided steel construction swingarm. Rake is 24.5 degrees and trail is 99mm with a wheelbase of 1420mm and seat height of 813 mm. Front suspensions is 43mm Ohlins with adjustable preload, compression damping while at the rear. It is Ohlins again, reservoir-style twin shocks with adjustable ride height. Front wheel size is 3.50 x 17” with chrome rim while the rear is 5.0 x 17” also with chrome Rim. Transmission is via five-speed cassette-type gear cluster is thoroughly modern and supported by an electric start. Front brakes are full Brembo system, twin Brembo 320mm semi-floating while the rear brake has a single Brembo 220mm disc with 2 piston “Gold Line” caliper. Dry weight of the bike is 188 kilos. Special features in the S.E are the carbon pack used on the front mud guard, chain guard, rear wheel hugger and the headlight mounting. For the Café Racer, you get clip on handlebars, black anodized billet yokes in the steering in place of fully machined billet yokes with triple clamp lower yokes as available in the other two versions and you get a Café Racer fly screen. 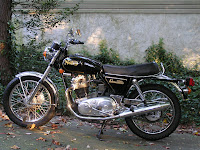 The Sport, CR, S.E and the 'Original'
Of course, you would sit ‘on’ the bike as you do on most classics, but having said that if you look at the stance in the video, you would notice it has a mixed stance of sporty handling yet not very forward bending, just right, enough for sharp handling, flickable which no way is going to strain your shoulder blades and all this is supported by some extraordinary suspension and brakes. Everything you see on it from the switchgear, lights, panels, wheels, everything is top notch, especially in the S.E, Special Edition, and that is the reason of the substantially higher price than the Sports and Café Racer version. All materials used is top quality and for a fact you still see Nortons of the 60s and 70s very easily running on the roads with little modification, so reliability is not even in question here.
As you see it, this is a classic, so you won’t get the ‘equipments’ and good for it, it stays true to the memories. The Norton motorcycles were always naked and the tradition continues with no plastic fairings of any kind, no luggage carrier either, just muscles and bones, a true show-off!

It is so British that you would forget the fact that all this restoration, all this bring back to the classic mode, a lot of credit goes to an American, Mr. Kenny Dreer who specializes in Norton rebuilds in his company firm, Vintage Rebuilds. Although I am not so sure about it, but the 961 seems to derive a lot from Kenny’s prototype. Maybe Kenny was behind the factory production, I don’t know about that. Kenny’s Commando was named 952 but it incidentally was of 961cc, with 5 gears and also displacing the same power and torque figures. The original Commando of the 70s displaced 828cc, had 4 gears and had a power output of 51 bhp @ 6250 rpm. What Kenny improvised on that is exactly what you get on the new 961.
The new Commando has the original authentic appearance and a mechanically similar general concept for its vertically split, air/oil-cooled dry-sump engine, with its forward-canted cylinders, pushrod valve gear and two valves per cylinder and so carries forward virtually every trait of the original including the authentic Smiths look.

This is a machine which you will take to the office even if your office is 2 kilometers away, just to show off that you have a Norton, this is the bike you will love to give your brother a ride because you know he will enjoy it, this is a bike your fiancé/ girlfriend/ wife will love to get in the pillion because it is so addictive and this is the bike that will cool your head at 2 am midnight just by looking at it if you happen to have a fight with your partner or even your boss. And the other thing is that these machines are largely hand built and with a steep price in comparison, not too many are going to be built anyway, so anyway you look at it, all these new Nortons are only going to get more costly in the used market some 20 - 30 years from now on. At that price, it doesn’t have any path breaking performance, but come to think about it, why do we associate price with performance, we can associate price with so many other things just like the moments you can spend on a Norton as mentioned in this para. As I said, this is like the old Bruce Lee or Charlie Chaplin movie, you know what it is going to be there (lots of laugh with Chaplin, lots of action with Lee and lots of boastful ego with the Norton) and you find exactly that, there are no surprises and that is the good thing because surprises can also be shocks sometimes, but when you get what you expected, you will be happy and this is what the Norton is all about. It will make you happy. Bad news is that except for Great Britain, it is available only in U.S and Canada.

Photo credits to NORTON MOTORCYCLE Official Webpage. Some photos as watermarked belong to London Bikers. Source of information is Norton Motorcyclers website. Visit the website for a look at the history and information on the company. You can also visit the three models from these links, 961 S.E, Sport and Cafe Racer.
Specifications: