This year at the 2009 World Championship Of Custom Bike Building that was held at Champions Park, Sturgis, South Dakota, USA between 2nd-5th August, Cook Customs’ Rambler and Kris Krome Customs Inc Re-flex-tion made it a 1 – 2 at both the Freestyle and Metric category with the Rambler bettering the Re-flex-tion by a huge 99 points in the Freestyle category while the Re-flex-tion narrowly beating the Rambler in the Metric class. These two talented teams shared the centre stage during the world championship with their single products and there were lots of new talent too who had more than one product and finishing on the credit list in different categories like Wonder Customs, Radical Kustoms, Beey Motorcycles from Mexico while there was one guy who had an amazing range of 4 products finishing on the credit list of 5 categories. Well, that certain guy is of course Roland Sands. The amazing designer bought 4 bikes to the championship, The Renstar which got mentioned in 2 categories, the Black Beauty, the Bu-Hell and the Kids and Chrome Fat Boy. His bikes made the most impact in the Modified HD category where the beautiful Black Beauty finished second while the monstrous looking Bu-Hell finished fourth. His third entry to the category, the Kids and Chrome Fat Boy also got mentioned in the competing list. The very beautiful futuristic yet very classically modern Renstar finished 29th in the Freestyle class and got mentioned in the Metric class. So let’s see what is it about his bikes that’s the judges love it so much? 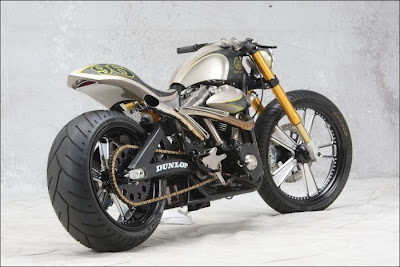 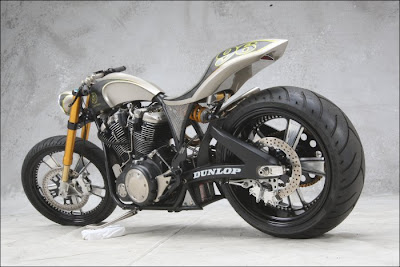 The Renstar’s heart belongs to a 2006 Yamaha Roadster. Most of the things in the bike are of course hand built. Starting off from the frame, to the swingarm ending off at the wheels, everything is hand built. Even the front suspension by Ohlins is worked by Roland. So is the beautifully designed short exhaust and the handlebars which are all handmade. And it is also obvious that the long gas tank and oil tank are also hand crafted just as the headlights are.
The front wheel is tall and thin at 21" x 3.5" while the short and massive rear wheel dimension is 18" x 8.5". Both wheels wear Dunlop tyres (front - 120/70 R21 Elite 3, rear - 240/40 R18 Elite 3).
Other details available are that the bike rake has been adjusted at 33 degree and equal if not less credit should also go to Mr. Chris Wood of Airtrix for giving the bike that magnificent two tone paint finish. The golden finish on the front forks really looks good and gives a classy finish and overall the bike does give a streetfighter image.Patrick Racing has provided the major ingredients going inside the heart of the reworked engine, from the heads, valves, pistons, cylinders, camshaft, lifters & pushrods to the polished Mikuni carb. The seat is done by Bitchin' Rich and the Renstar sports Radianz taillights and R1 rearsets. 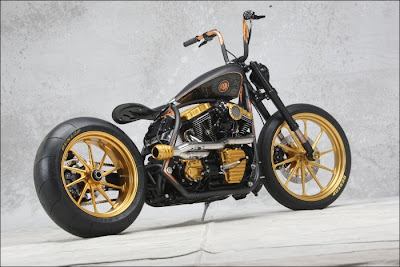 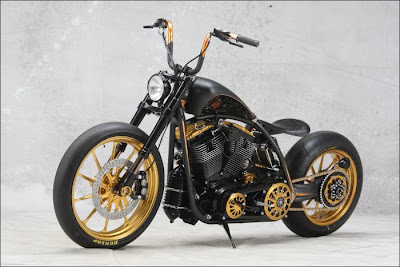 I fell in love with the Black Beauty which finished a very creditable 2nd in the Modified Harley-Davidson Class. The yellow golden touch on the rims and the naked engine chain and rear sprocket enhances the overall brilliant matt finish of the bike by its contrast. The colour scheme is also applied on the top of the engine and a bit of it on the handlebars which looks just perfect. The angular shaped high handlebars give it a typical chopper look and it has to be mentioned that the tank is really well done with the two tone paint scheme. A job of a through professional. The donor is a 2003 HD Softail and the bike carries the transmission system from the original as does the frame but reworked in the hands of Mr. Sands. Of course the swingarm is the creation of Roland assisted by the renowned custom builder, Gregg’s Customs. The front end has been designed by Roland too. Here too the short straight exhaust, the gas tank and the oil tank has been hand crafted by Mr. Sands. The size 21 front wheel and size 18 rear wheel is PM Assault while the tyres embracing these golden beauties are from Dunlop. If it is the artwork that fascinates you, you again need to credit Mr. Chris Wood. The seat on this bike too is done by Bitchin’ Rich. The front suspension has been a surprise as it is from a Suzuki GSXR. On the Black Beauty, the engine has been reworked by Kuryakyn heads, valves, pistons, cylinder and camshaft. 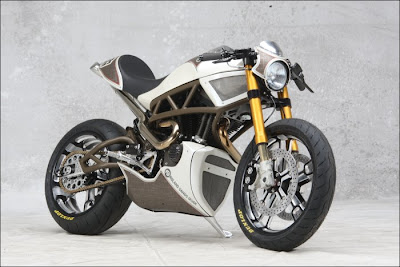 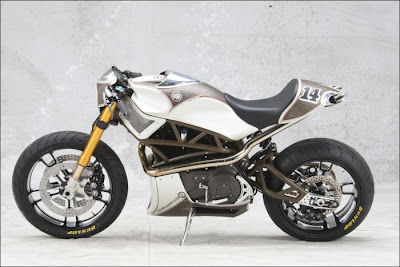 Then there is the Bu-Hell which finished 4th on the same class, Modified HD category. Well, I didn’t know that Buell bikes could enter this class or probably never thought about it. Surprisingly the sports bike has got almost no resemblance with the original 2003 Buell XB9. The XB9 is definitely not the most beautiful, or rather handsome bike out there, but Roland has made it quite a looker with that Ducati styled frame. This bike looks mean and if the performance figure of the XB9 is anything to boast about, this bike has quite a road presence in terms of performance. Compact with a powerful engine, this will definitely be a city slicker although the fat tyres might decrease the enthusiasm to a degree. But nonetheless, it looks incredibly well for a Buell.
But hold on, the 900cc mill has been bored out to 1200cc, now I wonder why didn’t Roland go for a XB12S engine instead? The transmission has been kept stock while the stock frame has been modified by Roland with a rake of 24 degrees. Of course the swingarm has been hand built complimenting the Ducati style frame. Ducati actually makes its presence here as the front fender is Ducati. I am not a big fan of the Buell radiators as it kind of sticks out, but Roland has done a beautiful job in, let’s say hiding it. Both the front and rear wheel are of the same 17 inch size and so would prove great for city handling. Both the wheels are crafted by Roland and both wear Dunlop tyres, the front 120/17/17 for its 3” width while the rear is 190/55/17 to cover the 6” width. Both the front and rear sports 4 piston calipers to aid braking, of course the front has a double disk. And again here the fine artwork is done by Mr. Chris Wood and the seat by Bitchin’ Rich. The bodywork fabrication is by Rodney Aguiar. I wonder what the numbers indicate, 96 in the Renstar and 14 in the Bu-Hell. The café racer get up headlamp is a Roland creation and there are quite a few in house things like foot controls, tracker grips, taillight and footrests. Suspension is from Ohlins. The work on the heart of the engine (heads, valves, pistons, cylinders, lifters and pushrods) are worked upon by Bennett Performance. 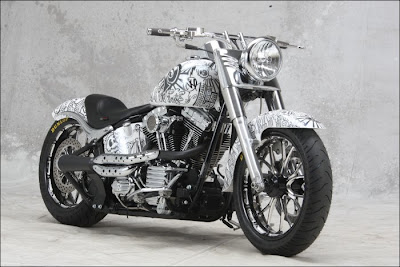 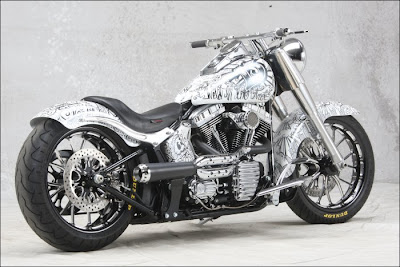 And the fourth entry from RSD, which is Roland Sands Design to the 2009 AMD Championship, is the Kids and Chrome Fat Boy which competed in the Modified HD category, yes the third entrant from RSD in the category. This bike seems to have got a very minimal customizing but the overall gloss is highly desirable, something like getting the maximum output with minimum input. The donor itself is a fresh bike, a 2008 Fat Boy and the engine is stock and so is the transmission. Roland hasn’t really changed anything on the bike as the frame remains stock along with the front end, rake, stretch and swingarm. The suspensions have been worked upon and he has changed the wheels, both in the rear and front with 18 inches (both) Performance Machine Heathen. The wheels wear size 18 Dunlop and the width at front and rear are 130 and 200 respectively. Along with the wheels, the front brakes and rear brakes are also redone courtesy Performance Machine with the front having 6 piston and 4 in the rear. Really no prizes for guessing who did the wonderful paint scheme, cannot really make out if the design is significant with something, but it is looking so cool. RSD has worked his charm on the body fabrication and there have been a lot of in house things to enhance the looks like the solo seat, fender kit, 2x1 exhaust, those straight handlebars and the tail light bracket. Switches and hand controls are also from Performance Machine.

So, do you see a pattern here, you do? Well I couldn’t. Each bike is distinctive of what it has been envisaged by RSD. They have just no relation to one another, I mean usually on customized bikes, you see a similarity, a kind of stamp of the builder’s house. And it is probably a good thing bad thing because you immediately associate the builder with the bike while at the same time not having a similarity means that each bike is individually worked upon for its purpose. While the Renstar and Bu-Hell are pure street bikes but still even between the two, the Bu-Hell has a more roadster image, the Renstar seems more like a Streetfighter. And among the lazy bikes, the Black Beauty is a definite chopper while the Kids and Chrome fat Boy is a show-off bling bling cruiser bike with a impressive presence due to the sheer mass of it. RSD has made a name for himself as one of the world’s premier custom bike builder and it is very easy to see why he has got world wide recognization.
Visit the 2009 AMD Championship to have a look at some of the world's best customized bikes of 2009 and you also should visit the Roland Sands Design website, you will love it!