Posts from The Community

You might have noticed that the blog has a navigator item mentioned 'The Community'. Well, actually it is a small group of like minded biker-bloggers and we all got to know each other through our blogs and websites. There are many more such active biker-bloggers and I am trying to get us together so that invariaby when anybody chances upon one blog/ website, s/he could also find a link to similar blogs and websites. below are some posts, mostly recent from our community which you might find pretty interesting. 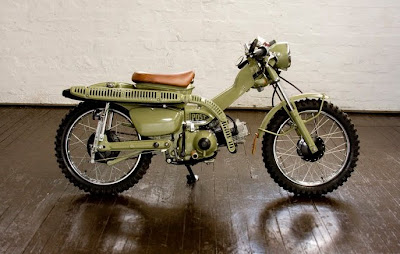 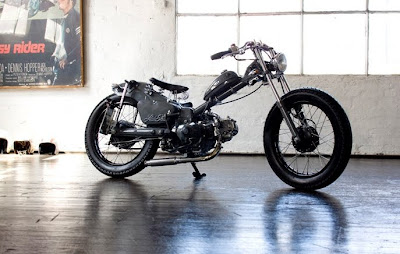 Scott from Pipeburn has the unusual knack of finding unusually brillaint motorcycles from various sources. From his superb collection of posts, it would be wrong to pinpoint a single post to what I said, but just to give you a glance of what it inside Pipeburn, take a look at the posts.

Honda CT 110 Customs The humble Honda CT110 is one of the most reliable bikes on the planet, which is why Postman use them to deliver the mail down here in Australia. They are affectionately known as 'postie bikes' and have always had a cult following but we haven't seen many customized, until now. A company in Melbourne called Postmodern Motorcycles are turning these air-cooled single cylinders into tasty little customs. The bike above is named 'Junk Mail', because it was built from all the junk parts lying around the garage. Postmodern says "The frame was stretched by 200mm, we added a little peanut tank and chucked on an Indian bike seat. There was 2 rear Avon tyres in stock so we used 'em both, on 2 Pak Blak rims. Finally the whole thing was painted the colour of lead". To see more great CT customs like the Military styled one below, check out the Postmodern gallery. Just like Deus have sparked a new culture of SR400 Café Racers down under, I'm sure we're going to see many more of these custom CT100's. [Found on Chalopy]

I am telling you if you like motorcycles that are unusual and yet brilliant, expect to find them in Pipeburn. Now Mr. Nolan of Vintage Motorcycles Online is a camera addict and an excellent one and that. Besides that, along with John, they have a really nice website on, well, vintage motorcycles, the writing is crisp and with 'age' on their side, they bring loads of experience to the table. These guys cover a lot of events featuring vintage and classic bikes like Bikes on the Bay, something that I never knew of. For their writing style, check out the post, MV Agusta Corona 1000S featuring a review. 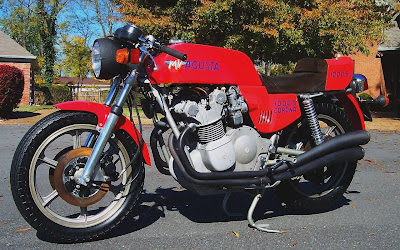 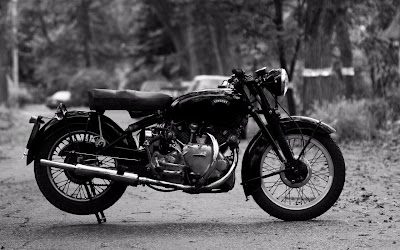 As I metioned, these guys are also excellent photographers. So time to time I keep receiving their mails with some awesome stuff. The second photo is what I got on my mail a few days back.

MV Agusta Corona 1000S If there was ever a rolling contradiction, it has to be MV’s line of production fours. Understated and refraining from the bold, they nonetheless come across as aggressive; confident. Promoted (and inscribed) with the promise of championship glory, Count Agusta, the factory’s archetypical kingpin, saw to it that his production wares left the gates detuned and fitted with shaft drive... Through the course of study, we sometime forget that behind every motorcycle are men, and that critical aspect is usually what separates them. And while the current Cagiva-backed range caused some real excitement and novelty in the market, the magic found in the original build eluded them. That can be explained in several dramatic and dynamic ways, the most fundamentally important being the exclusion of the machine’s namesake. This finds no fault with MV modern, for their effort was and is grand in many ways. Even so, greatness cannot turn back the technological tide that has swept in since.

Bikes on the Bay The event was the 4th annual “Bikes-on-the-Bay” vintage motorcycle show. A year ago, I had heard that this event was a “must” for any vintage and retro motorcycle enthusiast. Since I was in town and not traveling on business I decided to fire up my trusty 850 Le Mans-III for a 65 mile jaunt south...

If you like reading, you should most definitely check Vintage Motorcycle Online. And then, of course there is Chris from Bike Exif. I am sure every biker who visits the web knows about this website. Just in case if you are new or haven't visited the website for sometime now, see what you are missing. FYI, Bike Exif usually features custom motorcycles. 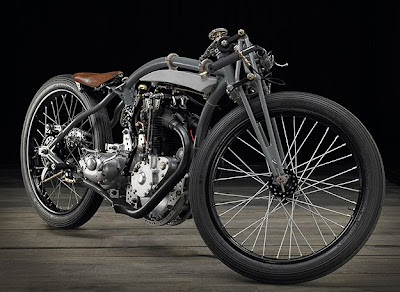 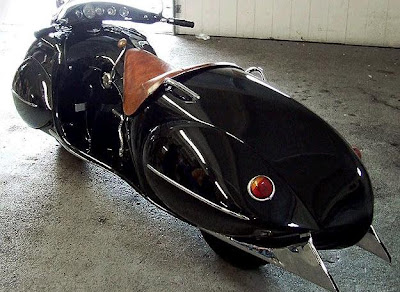 Where else on eath would you expect to find Rudge and Henderson custom modified bikes? Of course, Bike Exif!

Rudge Withworth This remarkably elegant vintage motorcycle is actually a bit of a mongrel: it’s a Rudge ‘bitsa’ built by Jean-Claude Barrois, who also restored the Honda CB450 and Terrot racer... Since this photo session two small fenders have been added, and the tires have been changed for modern high-speed Avons. Jean-Claude is now optimizing the ignition system to gain a better spark, and next month the bike will be packed in a container and will fly to Salt Lake City for the Bonneville Speed Week. The photos, if you haven’t already guessed, are from Guerry & Prat—who can always be relied upon to deliver beautiful images of unusual motorcycles.
They’ve just launched an exhibition in association with Nick Clements (of Mensfile fame) in Toulouse, which will definitely be worth a trip if you’re in Europe. [Get more details of the Rudge build from the Southsiders MC website.]
1930 Henderson Custom Every few months, a bike comes along that completely stops me in my tracks. Like this one: an Art Deco-influenced machine that could have
come straight from the pen of Harley Earl. The bike caused a stir last month when it appeared at the Rhinebeck Grand National Meet, a popular motorcycle show held a couple of hours drive north of NYC... until its demise in 1931, the Excelsior Motor Mfg. & Supply Co.—the owner of the Henderson brand—was one of the ‘Big Three’ American motorcycle manufacturers, along with Harley-Davidson and Indian. There must be more remarkable Henderson customs out there—if you know of any, drop us a line.

I am adding a lot more links to the community and in case if you think there are websites, lesser known, but has excellent content, do recommend them. It will be well worth to find more of these crazy people ;-)